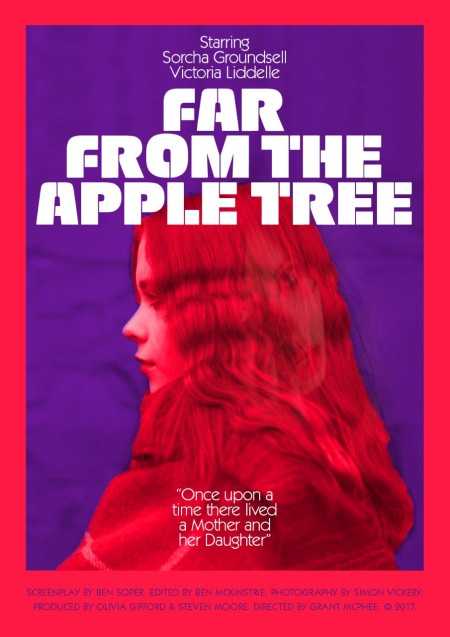 Far From The Apple Tree, directed by Grant McPhee (Big Gold Dream, Night Kaleidoscope), writer Ben Soper held a Q and A after the screening of this monumental Scottish cult horror film. also seeing his story being represented visually for the first time, I’m sure he had some questions himself. Earlier on before I had decided to cover this festival I had impatiently waited for a film list where I could dissect synopses and stories. Upon reading what the film is about, and getting a feel into how it was going to be presented, I knew I had stumbled upon another “mother!” type of masterpiece.

The story involves an experienced and very successful artist Roberta, who spots ur protagonist (of course, a struggling artist) Judith her show, and invites to meet.  Roberta then makes an all-or-nothing offer which Judith accepts to live in with her as a type of residency; with the promise of her own show at the end of it all. As Judith is cataloguing and viewing various pieces of art from Roberta’s past she discovers a twisted part of Roberta’s past involving a young girl who resembles Judith; her daughter, Maddy.

This Scottish masterpiece resembles the elite storytelling of “A Cure For Wellness“, it will have you wishing you thought of the immaculately placed “Easter Eggs”. There were times were aspects of the story left me feeling absolutely blindsided, wondering to myself why I was oblivious to that certain snippet. Ben Soper, the writer of this amazing story didn’t even see how they had brought it to life visually; this is what he had to say:

B. –“Grant came to me a few months before the shoot and said “I would like you to write a film for me”, and gave me a few pointers. He wanted video archiving somehow to be a part of the story So I knew (that) he was looking for something he could do where the story almost grew out of the aesthetic. He had this idea that he wanted to shoot something through different mediums. so I wrote an 85-minute thriller, at which he adapted and reinterpreted and then did various bits and pieces with. Although there was an awareness in this script, I feel like, in the finished film the archive dominated in this very strange way that even I wasn’t expecting, but it made it even kind of trippier because it does feel like the work that she is looking at actually spends almost more time on the screen than her not looking at the work. So you do sort of find yourself, possibly being absorbed by it, depending on the audience.

A. – So, you said this is the first time you’re viewing the film. How do you feel you’re story being brought to life visually?

B. – I was giggling quite a bit. Out of happiness in parts, yeah it’s a really strange experience because it’s the thing that I wrote is being interpreted and some of it is like “WOW! That’s made up so much better”, and other stuff is like “I never, I never meant that!”, It’s a bit gone over there but it’s sort of interesting and has its own merit. It really, really has been adapted and it feels like, a sort of ambient-punk cover version of a lean 85-minute thriller that’s had a bunch of stuff ripped out and other stuff put in and exploring other stuff in different directions. So yeah I feel like I just woke up from a really weird dream.

A. – I wonder, what really inspired you to write this story.

B. – So really, it was a facebook message saying if you write something quickly, I’ll give you some money. What came with that was stuff, I’ve worked with Ron a few times, he’s a cinematographer, I’ve directed a few music videos which he had shot, and we have a shared language of seventies and eighties horror movies. He knew the type of thing he would write if he had asked me to write something for him, he gave me some references, his favourite film is The Performance (Nicolas Roeg, Donald Cammell) and that’s kind of in there. Also, The Wickerman (Robin Hardy, Anthony Shaffer), although The Wicker Man was made more in the script that it was in there (the film); some of the stuff happening in the party room and the other people in the house we don’t really see as much in this, but we do see the menacing glasses kind of clinking on the wall, and the figures outside, yeah that was in there. Thing is when you do something very quickly you don’t think so much, I didn’t really have time to think. I knew that he asked for a weird horror, one location, focusing on women, he wanted it to have to do with a video archive, he wanted references to cult literature, I kind of had this shopping list, and I sort of went for it. So yeah, that’s my shopping list.

So that was what Ben had to say about the film, and that was my minute chance at interviewing. I want to thank Toronto International Spring of Horror and Fantasy film festival founders Jon and Lari for having me. I highly recommend you see this movie, there was one scene where Judith enters a secret room in the house, at that particular time as the ending. I would have quit life.